Visual Management – Powerful and Not So New

In working with many organizations, this concept is new and can lead to powerful improvements. It is worthwhile to remember that many organizations have been using this common sense and important tool to organize key processes for a long time.

I had the pleasure of spending Father’s Day on the USS Midway floating museum in San Diego. It was a wonderful way to spend a day learning about the pivotal battle of Midway in World War II, the history of the aircraft carrier named for that battle, key naval aircraft, and the operation of an aircraft carrier in launching and recovering aircraft.

As I learned more about carrier operations, I was impressed with the finely tuned standard work that could allow for:

All of this work is completed roughly every 60 seconds per catapult. With the dual catapults on the Midway, this would allow up to a launch every 30 seconds during combat operations. 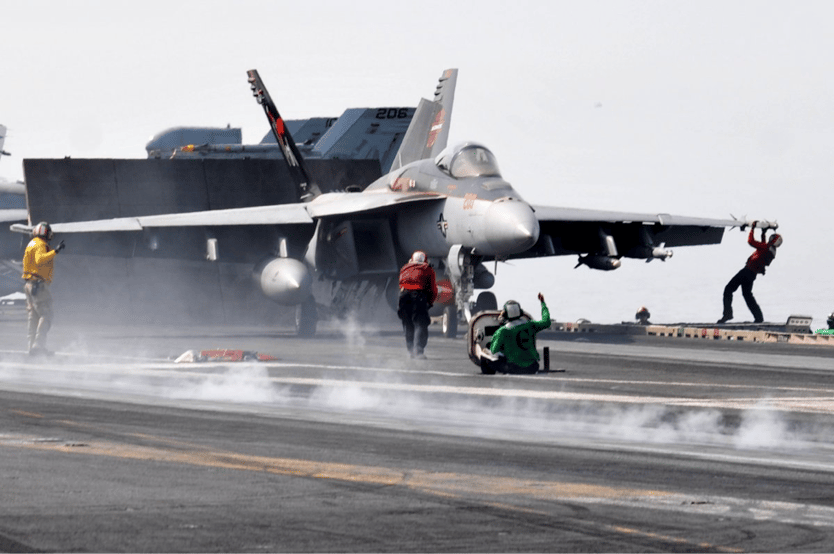 One of the beautiful aspects of working with Lean is that you start to notice the tools and concepts at work everywhere around you. As we were learning about the launch operations on the Midway, I saw clear evidence of the use of color as an organizing principle to allow for more efficient and safe conditions for launch operations.

Aircraft are served by a large number of highly trained sailors with very specific and clearly defined standard work. The safe operation of the whole demands that each job is performed perfectly. With the noise and danger of an active flight deck, it is critically important that everything works as designed. To allow for communications without radio emissions, each role on the team wears a different color, so everyone can clearly know who has which job covered.

The roles of each color jersey

The result of visual management

A pilot in their aircraft, preparing for takeoff can easily see specifically who to check with for each of the required steps before the one and a half second acceleration from zero to 150 miles an hour, launching them into the sky. Using specific color jerseys for the many people involved in these operations improves the safety and efficiency of conducting safe operations in this high-risk environment.

The color scheme designed over the years by the US Navy in carrier operations has been found to be the best standard work there is. It is used not only in the US Navy, but has been adopted by many of our allies as well.

Evans Kerrigan works tirelessly in both corporate and public sectors as a dynamic business consultant, presenter, and coach. With over 30 years of experience working with multi-national organizations such as Cisco, Sun, Blue Cross Blue Shield, BP, State of Arizona and King County Washington, Evans has been at the forefront of change management--building healthy organizations and creating great places to work. His contributions to these organizations have been credited with increasing employee engagement scores, dramatic reductions in costs and improvement in efficiencies and revenue, resulting in improved operational excellence.
Posted in Lean Culture