Let’s talk about the 4th level of the Five Behaviors of a Cohesive Team™ — accountability in the workplace.

To recap your team’s progress to this point: Your team has become more cohesive and is making great strides in developing trust.

They are engaging in constructive conflict and debate focused on key issues and eliminating gossip, personal attacks, and turf wars.

The team is reaching key decisions cooperatively — now it’s time to hold each other accountable for the implementation of the policies and decisions they crafted together.

Accountability in the workplace is often misunderstood — the first thing that people imagine is the parent-child relationship style that many leaders have with their subordinates. It comprises all-or-nothing policies, “Because I said so,” a noticeable lack of options, and threats of consequences.

If you want a healthy team that operates at its highest level, that constantly pushes its limits and seeks to achieve even more, the old top-down authoritative model will be insufficient.

Instead of a parent-child style of accountability in the workplace, a model more resembling an Olympic gymnastics team is preferable — you’re a team, after all.

The gymnasts know beyond all doubt that success and failure of the team rests on the shoulders of each individual’s performance, but they are all a team when it comes to succeeding.

They perform solo, and yet they are bound up together through their shared passion for, and investment in, their chosen endeavour.

Each person is responsible to the other team members for giving their absolute best because of their collective pursuit of the gold medal.

During the 3rd of the Five Behaviors of a Cohesive Team™, your team will have committed to a team decision based upon the best ideas and input the team could provide. Everyone will have been heard, which will have made it easier to commit to executing the decision.

In doing so, they will have defined responsibilities, benchmarks, and deadlines. These details are critical because they open the possibility for everyone to measure the progress of all entities involved — everything’s out in the open.

The next step is to hold people accountable. Each person must fulfill their responsibilities and make good on their commitments for the team to achieve its desired outcomes.

Peer accountability differs from top-down, authoritative accountability because it requires and breeds transparency. Peers holding each other accountable requires open and clear communication, particularly in areas such as:

Transparency, vulnerability, and openness are vital components of accountability.

Here’s the thing most people don’t understand: Accountability in the workplace doesn’t have to hurt.

Too many people associate accountability with a negative confrontation involving a lot of harsh attitudes and biting messages, such as the following:

Of course, the actual words that are used may be more professionally appropriate, but these are the messages that are too often conveyed when trying to hold others accountable.

The foundation of trust and healthy conflict quickly erode, and the team returns to a place of hostility, resentment, and distrust. The backstabbing and turf wars will likely escalate.

The good news is that all this can be avoided by asking a simple question.

It’s such a simple question, yet it’s one of the most effective ways to hold teammates accountable at work.

Most people in business (or in many other life relationships, for that matter) fail to grasp the sense of duty and of willing accountability that you foster by offering to help another person.

By offering support to get a struggling coworker back on schedule, through a rough patch, or by providing them with information or knowledge they need to get the job done, you reach them on an emotional level.

They are challenged. They can re-engage.

Teammates who have received such support from their colleagues often feel a renewed obligation to perform at their best and will strive to “pay it back.” They’ll experience a natural desire to up their game and pull their own weight.

Here’s the truly amazing part — those were exactly the behaviors desired in the first place. Your teammates are back on track.

Accountability and motivation can often be recovered and strengthened with zero shouting or negativity. Resentment and fear fail to materialize.

You’ll be much more likely to preserve the vulnerability-based trust and the willingness to engage in issue-based conflict that you invested in so heavily while building your team.

Accountability by Authority — Less Is More

If all goes according to the model, performance remains at a high level while rarely relying on the boss to play the role of “enforcer.”

The manager still has to be prepared to hold his or her team members accountable should peer support and pressure fail.

In a best-case scenario, the simple understanding that the boss is willing to take decisive action serves as a deterrent.

The actual use of authority to maintain employee accountability will become a rare event, but awareness alone makes authority a subtle yet effective tool for holding people accountable.

Peer Accountability in the Workplace Achieves the Best Results

Top-down authority is not the model for accountability in the workplace that you want to lean on regularly. It’s less effective than peer accountability.

(The boss is still the first resort for accountability on work performance issues and should not shirk this critical duty — team members should probably stay in their own lane in these areas.)

Stop expecting the boss to keep people on task when it comes to fulfilling responsibilities related to team decisions.

Returning to our sports metaphor for a moment: Every athlete on the team should be accountable to every other athlete — not primarily to the coach.

Offering support can be one of the most powerful and painless ways to achieve true accountability in the workplace.

How the Team Leader, Manager, or CEO Can Encourage Better Peer Accountability

Don’t be mistaken — the leader isn’t off the hook.

It’s vital that the leader carry their portion of responsibility when it comes to team accountability.

If the leader doesn’t practice holding people accountable, it becomes much harder for the team to do so. This is a “both/and,” not an “either/or,” situation. Everyone must participate in team accountability across the board.

While we’ve concluded that relying on the authority figure as the primary source of accountability is less than ideal, there are things the boss can do to foster or promote higher accountability in the workplace — read more here.

Gwen Voelpel has 20 years of experience in coaching and mentoring leaders at all levels of organizations. She has an undergraduate degree in communications, a graduate degree in public administration, and has served as an executive leader in several organizations. Gwen is an accredited Five Behaviors of a Cohesive Team and Everything DiSC Workplace Facilitator and a Certified Master in Training for The Leadership Challenge.
Posted in The Five Behaviors of a Cohesive Team™ 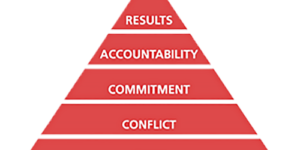 The Five Behaviors of a Cohesive Team™ Workshop [Course Description]

Success Story: Pulling Healthcare Teams Together with The Five Behaviors™ of a Cohesive Team™

Trust in the Workplace — Inspiring Organizations to Achieve Their Best